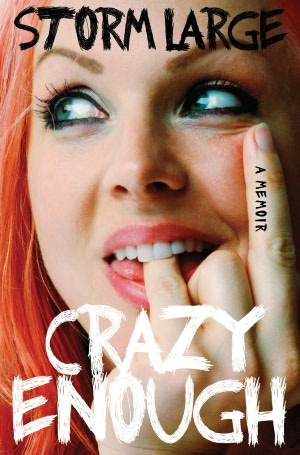 “Like some twisted love child of Mae West and Keith Richards, Storm Large is a force of nature. Her ballsy, heartbreaking, hysterical, tour de force of a memoir is not to be missed. Crazy Enough is vulgar and fragile, tragic and empowering, and like Storm, it is always entertaining” (Chelsea Cain, New York Times bestselling author of Heartsick and The Night Season). Storm spent most of her childhood visiting her mother in mental institutions and psych wards. One day, nine-year-old Storm jokingly asked one of her mother’s doctors, “I’m not going to be crazy like that, right?” To which he replied, “Well, yes. It’s hereditary. You absolutely will end up like your mother. But not until your twenties.” Desperate to delay the lonely sickness and sadness that haunted her mother, Storm stomped her size-twelve boots straight toward as much sex, drugs, and rock ’n’ roll as she could find. She sprinted through her young life, trying to stave off the madness she feared would catch up to her at any moment. Instead, she found herself deep in a life of craziness of her own making. Then, in her twenties, with nothing to live for and a growing heroin addiction, Storm accepted a chance invitation to sing with a friend’s band. That night she reconnected with her long-term love of music, and it dragged her back from the edge. She has been singing and slinging inappropriate banter at audiences worldwide ever since. With tremendous honesty and tremendously dirty language, Crazy Enough is about an artist’s journey of realizing that the mistakes that make, break, and remake us are worth far more than our flailing attempts to live a life we think is “normal.”